Meridian at The Village Dallas Readies Its Debut

It’s April, already. The Village Dallas is poised to open its crown gem, the centerpiece of one of the biggest and hardest-to-wrap-your-head-around openings this year. We knew there would be the grab-and-go market, MOGO. Then the openings would start rolling after that. The 300-acre, 17-property campus, originally built in 1968, is now redesigned to be walkable and sprawling at once. There’s to be a lagoon-style pool and beach with swim-up bar, a tiki bar near the putting green, a food hall with eight stalls that range from tacos to wood-fired pizza. But also the high-end restaurant Meridian, where Junior Borges will be executive chef, in addition to being vice president of culinary, broadly. If anything, the fact that the project is so vast means it presents a gathering up of his entire career.

“It’s been exciting hiring the team and getting them together,” Borges told me in late December before the roll-out started. Since then, they’ve hired people and are moving into gear. It’s worth taking a look. Indeed, it’s worth doing a deep dive. Much like the sheer immensity of The Village Dallas, Meridian contains multitudes.

Granted, I haven’t dined at Meridian, but the restaurant promises extraordinary bread and many other delicious things. I’m sharing what I’m excited about through intel plumbed from a handful of interviews as the expansive project tiptoed towards fruition.

Consider this an explainer of what to expect when Meridian—eventually, any moment now—opens.

“I’ve been thinking a lot about what this restaurant is going to be,” Borges says, and what he wanted to accomplish since leaving the Joule to pursue what he calls “a restaurant of my own identity” in 2018.

Borges just turned 40. “My story is not better than any immigrant story,” he says. But he wants to make food he believes in now. For him, it’s time.

Before Dallas, where he held executive chef positions at FT33 and Uchi and presided over Mirador and Americao for the Headington Companies, there was New York. He moved to the city just weeks after 9/11 at the age of 20 as an immigrant from Brazil. That is the story that doesn’t get circulated as often as the rest. But it should, and he’s begun to tell it more. Those were formative years.

“Not a lot of people know this,” he begins, how one of his first jobs was as a bathroom attendant at the legendary live-music venue Sounds of Brazil, a hub for Afro-Latin music. How, from there, he worked his way into kitchens. Up the chain to the tony, four-star Quilted Giraffe perched atop the Sony headquarters (with those famous caviar-filled “beggar’s purses”). Then finally into Diner, a restaurant niched in an old railway dining car in Williamsburg, that had no menu at the time (and still doesn’t), but a butcher-paper scribble of daily dishes that altered with the whim of the farmers’ deliveries, which came in wooden crates with “tons of dirt” on them, he recalls. The only thing on the menu steadily was a burger, but it was a gorgeous burger.

“I was exposed to simplicity. That food was so rooted in the ingredient. It was just [so] simple. It taught me so much.”

They were ahead of their time. The food was simple and farm-driven—very Alice Waters’ Chez Panisse, very Zuni Café. The kind of place where you land beautiful heirloom beans in broth, followed by a tangle of frisée and a wild-berry clafouti to end things. And one evening in 2008, Anthony Bourdain came in to tape No Reservations, put his hand on Borges’s shoulder and said, “You are in the right place at the right time. This is the future.” He’ll never forget the moment. He was an immigrant, dealing with the language and cultural barriers and prejudice he endured. But it trained his sensibilities.

“I was exposed to simplicity. That food was so rooted in the ingredient. It was just [so] simple. It taught me so much.”

At the same time, he was exposed to and soaking up all of what New York was then. He was going to Per Se and offered jobs he couldn’t take. He opened Colicchio and Sons and was lead cook at A Voce, a temple to pasta from the inimitable Missy Robbins, whose simple flour-and-water creations are reverie-inducing.

He asked questions and didn’t take “no” for an answer. Despite the “shitty situations” and the discrimination, he hovered close to Robbins, whose ethereal pasta marked him, and was inspired by her later restaurant Lilia.

And while all of his influences have been important, and one typically looks to recent work, I think it’s worth noting, because here, more than ever, those experiences are coming together, shaping, resurfacing—even as they twine with his heritage. 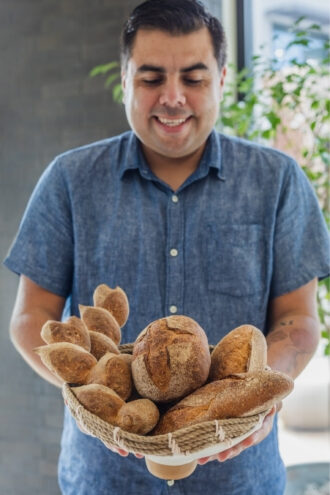 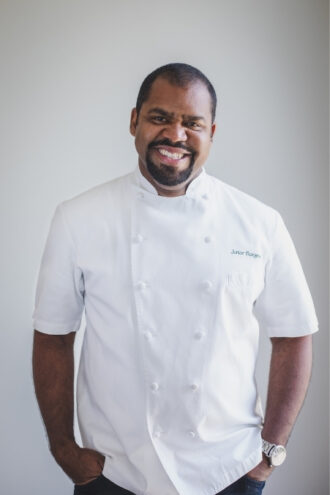 Junior Borges: “I was exposed to simplicity. That food was so rooted in the ingredient. It was just [so] simple. It taught me so much.”

I think it’s important to note the fact that Borges is joined by David Madrid, the extraordinary baker whom you might remember from his time as Wheat & Sour, an ephemeral cottage baking business which upended the dominant (mostly levain-free) paradigm in Dallas back in 2016.

You remember when Empire Baking and Village Baking Co. were our only levain options and you had to search high and low for a croissant. When natural levain and viennoisserie exploded in a slew of talented home baker businesses more recently, it was in the wake of Madrid. He was the first to use local Barton Springs Mill flour, the first to push hydration and heirloom grains, the first to elevate what we could expect from bread. A fiend for sourdough and sneaking in whole grains, he revolutionized the scene.

Meanwhile in January 2019, when Borges was consulting, he connected with Madrid (still in San Francisco and plotting his Dallas comeback) and they kindled the desire to work together in some capacity. So they’ve plotted to work together for a while now.

A broad brush is necessary for a project with the scope of The Village Dallas. I’m excited for both of them to apply that broad brush. For them to have somebody to bounce ideas back and forth. For them to collaborate on triple-chocolate teff cookies, at the very least.

The Far From Insignificant Others

I’m not the only one to be jazzed about this partnership. “I’m a chef-driven person, but I’m about the people around me, the team,” Borges says. The team has other heavyweights, too.

Daiana Guzman joined the crew because she wanted to soak up knowledge from someone as experienced as Madrid, the baker she had heard about who was coming from the Bay Area—almost mythical, chimerical. “I came on board with David to learn more about bread,” she says point-blank, and she’d heard he was lauded for his teaching style.

Guzman has extensive pastry knowledge. She came on not wanting an executive pastry chef title, not craving a limelight. She’d had that before. But, rather, to soak up Madrid’s “vast knowledge of bread and viennoisserie.”

Guzman was the executive pastry chef at the French Room, making the 13 mignardises—the tiny, elaborate mouthfuls that range from bergamot marshmallows to dainty pâte de fruits—for the dessert cart as well as elegant plated desserts. Prior to that, she helped open Flora Street Cafe under James Beard–nominated pastry chef Ricchi Sanchez and learned chocolate work from stalwart leader Katherine Clapner. Then she flanked the extraordinary Maggie Huff at Homewood. This was a round of the city’s best in chocolate and pastry.

But she wanted to learn bread.

It is a boon, “being able to truly understand the science”—of liquid or stiff levains—and the technicalities of sourdough that gives nuance to something as simple as a chocolate chip cookie.

“Now having David as my library, I pick his brain.” On her day off she’s R&Ding triple-chocolate conchas (her grandfather was a baker in her native Mexico: she’s bringing things full circle).

“They’re expecting a cherry lattice pie,” she says of customers who came to MOGO for National Pi Day a few weeks ago. Instead, she gave them the richness of coconut cream and malted milk filling amongst the brightness of whipped lime ganache and a white chocolate-toasted coconut crunch disc on top, finished with Maldon sea salt.

Guzman will work on projects from Meridian to the more casual outlets.

Multifaceted pastry chef Sarah Green recently joined the team as well, and Justin Mosley helms the kitchen at Meridian alongside Borges (they overlapped at Uchi, FT33, and Mirador). That’s the cross-pollination I’m talking about. The benefit of mentorship that can lead to innovation and incubation.

What You Can Expect

That means wood hearth–roasted proteins and pastas like braised lamb in chermoula spice with saffron tangled in the generous, supple folds of freshly made pappardelle topped with dollops of labneh. Or ravioli stuffed with pancetta-seasoned pork belly and whipped ricotta. Or merely a tomato-sauced pasta, but from red Comeback Creek gems.

“Not rewriting the book, just doing those nuances,” Borges says. He’s bringing things full circle and building it into the culture.

So the wood-fired tomatoes enfolded into an nduja dip are part of that. The Portuguese Brazilian traditional of couverture, a bread course with small dishes that open a meal, makes its appearance. Currently, they’ve been experimenting with the Scandinavian kanelballer, sweet or savory (think caramelized onion). Breads with cultured butter embedded with different things—black truffle or dehydrated pickled blueberry powder—will rotate and fluctuate. 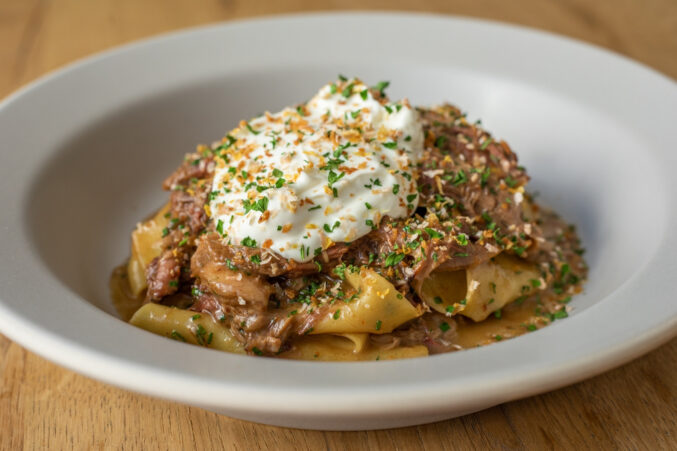 Pasta Us, Please: We want to cuddle into these folds of pappardelle topped with chermoula braised lamb, labne, and gremolata.

“That’s us elevating the bread program,” Madrid says. Perhaps one night you encounter a multigrain miche, demi baguette, or mini boule, or lacquered savory brioche. With so many things they wanted to do, so much spit-balling about bread is no afterthought. I’m excited about this level of detail, writ large.

I expect you’ll find beef tartare with black truffle XO and crispy shallots, and gossamer fluke crudo bejeweled with finger lime and coriander blossoms plucked from the garden with 18 raised beds nearby. (They’ve been harvesting from the garden and preserving for numerous seasons; that’s how long the project has been coming.) Or queijo coalho, a snack of grilled cheese with oregano, among dishes that speak to Borges’ Brazilian heritage. The yuca cake—a riff on a sweet made by Borges’ grandmother from Bahia, Brazil—is an example of how they construct a plated dessert, technique-forward, but simple: yuca and coconut with a coconut sablé, lime jam, and whipped coconut ganache.

They’ll play with sunchoke or parsnip tarte Tatin or strawberries roasted over the hearth in a lemon cremeux with saba and strawberry Arlette (puff pastry).

Somewhere I should note that Meridian’s is one of the most stunning restaurant kitchens I have ever seen. And the commissary is vast. It’s not lost on me.

Why Be Excited So Soon?

The fact that we have a place like this reminds me of El Bullí. Not the El Bullí lab, quite, but a place of experimentation.

“We have a special moment here,” Madrid told me recently. What he meant was opportunity to highlight bread and so on. But I see it as bigger.

“As a chef, opening Meridian, I’ve waited my whole life to do this,” Borges says. It feels that way.

So, yes, forgive me for repeating it, but I’m excited about the two of them coming together. I’m eager to see what it might create.

I haven’t dined at Meridian, obviously. But this is what I’m excited about—and why. I saw the way Borges oversaw Mirador and I’ve tasted his food on many occasions. He’s speaking even more for himself now, and as part of a collective.

Borges just entered his fourth decade, a birthday and an anniversary which “makes it 20 years I’m an American. My story is not better than any other immigrant story. But I want to tell it as much as I can. Because it’s important.”